Just as in the first cause, over eating, over drinking is also a cause of disease.  Extravagant or excessive drinking of fluids, even the very source of life itself, water, can cause illnesses and weaken one’s strength.  This is a testament to the verse:

Everything imaginable can be the cause of weakening of the human body and a threat to life.  The ayah referred to earlier also applies here:

وَكُلُوا وَاشْرَبُوا وَلَا تُسْرِفُوا إِنَّهُ لَا يُحِبُّ الْمُسْرِفِينَ
and eat and drink and be not extravagant; surely He does not love the extravagant.  (7:31)

The Prophet, peace be upon him and his Purified Household, is narrated to have said:

And in another narration:

Imam Ali, peace be upon him, has reportedly said:

In this narration, the duplication of the word “little” is an emphasis and on the subject – that the amount of not only food should be minimised, but that of water also, as both can be causative agents for disease independently.  Other narrations have the subject matter as only water – citing a healthier body with less water, while others again indicate the over consumption to be a cause of disease.  Some narrations to the effect of the latter will be mentioned to eliminate doubt as to causation of disease with over consumption of fluids:

The narration above appears to indicate the prolongation of an existing disease, apparent or otherwise, with excessive water.  But what of it being a causative agent?  The narration helps with this question:

لا تكثر شرب الماء فأِنه مادة لكل داء
Do not drink water excessively for it is the building block of all disease.
(Al Kafi 6:382 H4)

The building block, which makes up all things of mater, and so being the original source of disease also.  Therefore, over drinking water provides the original needs of disease to thrive – and so the causative agent for the origination of disease, and not simply a prolongation or making apparent of an existing disease.

The limits of drinking

While this returns to everyone’s needs, narrations can help set some upper limits.  The Prophet, peace be upon him and his Purified Household, was quoted in the earlier article as having divided the stomach in to three, with a third for water.  The application of this can also be returned to that of food – in that water should be consumed to the extent where when still desires it further after finishing, and to not fully quench one’s thirst.

Sheikh Tabrizian, in his Volume 1 book, pages 207-209, then discusses the narrations with regards to drinking water with food.  The conclusion that is drawn from the discussion is that, while considering the narrations on this topic collectively, water should not be consumed with food (regardless of whether the food is of a fatty/oily nature or not, but what is certain is that water with o5ily foods is harmful), and the required amount of water should be minimum after having food, and even then, should possibly be avoided all together immediately after food so that drinking of fluids after food is delayed.

The first issue discussed in this section was some of the contradictions with narrations with regards to drinking with food, and was resolved above.

The second issue is that there are some exceptions to the limitation of drinking of water, including certain disease states involving pain.

The third issue is that of the method of drinking water and the harm of gulping water down.  The term translated as “gulp” her is عب, and in the dictionaries, is drinking water without sipping it or without breathing.  In the first instance, it refers to the water reaching the mouth and back of the throat in one stage, while sipping is the transfer of water to the mouth, then the back of the through in two stages.

The second instance, without breathing, is the continuous drinking of water without cutting the drinking for a brief break to divide it in to parts.

We can benefit from the narrations here, where the Prophet, peace be upon him and his Purified Household, has said:

So gulping in narrations has been contrasted to sipping.  Further narrations lead us to the damaging effects of gulping fluids –damage to the liver, with such narrations as that of

As for the breathing, the indications are for the need to divide the drinking of water in to two or three portions (Al Mahasin 576, Al Wasail 25:247, Al Bihar 63:467), and the narrations are plentiful in this regard with most indicating division in to three.

Drinking water in one go has been likened to that of the drinking of the camel, ” الهيم ” (Al Mahasin 576, Al Wasail 25:245), referring to people of hell who drink like the camels do: 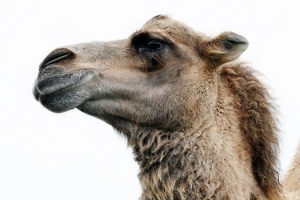 The narrations from the Prophet, peace be upon him and his Purified Household, states the first is for gratitude to whom gives him the water to drink, the second is the eviction of Satan, and the third is for the cure from what is inside him (Makarim Al Akhlaq 151, Mustadrik Al Wasail 17:10, Bihar 63:575).

The Prophet, peace be upon him and his Purified Household, has ordered the one that drinks to say bismillah when he drinks, and to praise Him when he finishes, doing so if he divides his portions at the beginning and end of each portion….

In another narration, a deduction has also been made that when drinking, one should not breathe in to the water, apparently so as the breath does not mix with the water to be drunk (Makarim Al Akhlaq 31, Mustadrik Al Wasail 17:10 H20590).

Should one stand or sit when drinking water? 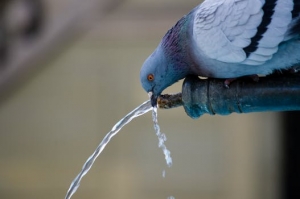 The discussion in Sheikh Tabrizian’s encyclopedia is one of a collection of narrations that appear to contradict each other as to whether one should stand or sit to drink water, with narrations plentiful and their sources strong, the academic conclusion derived from them was the following: